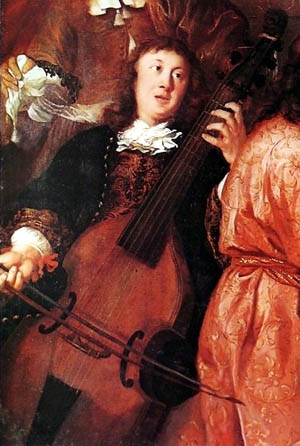 There are few documents concerning Buxtehude’s life. From a contemporary article in Nova literaria Maris Balthici, published soon after his death, we know that he regarded “Denmark as his homeland, from where he came to our region.”Dieterich Buxtehude, to use the spelling of his forename which he used when signing letters, was born about 1637 in Helsingborg, so he was a subject of the King of Denmark. His father, Johannes Buxtehude, was an organist, and taught his son sufficiently for him to become, in 1657 or 1658, an organist in Helsingborg and later in Helsingør. On the 11 April 1668 he was chosen to succeed Franz Tunder as organist at St. Marien in Lübeck, and until his death on 9 May 1707 Buxtehude remained in that position, one of the most important in northern Germany. After his death in 1707 musical experts praised Dieterich Buxtehude particularly for his keyboard music. For example, Johann Mattheson referred to him as a “highly regarded, former Lübeck organist.” That appreciation was based not on printed works, but on manuscript copies of his keyboard compositions, and on his reputation as a virtuoso which he enjoyed throughout Germany. Thus in 1703 Georg Friedrich Händel and Johann Mattheson were in Lübeck, and during the winter of 1705–06 Johann Sebastian Bach also went to Lübeck to study under Buxtehude so as to perfect his technique in composition and organ playing. Together with vocal music and music for keyboard instruments, two publications of his trio sonatas are extant. We know of the “Abendmusiken” in Lübeck from libretti printed for those occasions, but unfortunately the music is lost. That tradition of events similar to concerts was taken over by Buxtehude from his predecessor Franz Tunder.