The Missa in c K. 427 by Wolfgang Amadeus Mozart is a fascinating work. As it was not completed by Mozart, attempts were frequently made from the 19th century onwards to complete it and thus make it performable – with quite differing results. Now Frieder Bernius and Uwe Wolf have published a new edition of the Mozart mass which attempts to produce a performing version while maintaining the greatest respect for the available material, without obscuring Mozart’s musical manuscript. Whether it’s in the double-choir "Qui tollis" or the "Cum Sancto Spiritu" fugue, the choral singers are most certainly challenged, and yet the atmosphere of the work mustn’t be lost. If the blend of accuracy and shaping works, nobody, whether performer nor listener, will be able to resist the fascination of this work.

With Mozart’s "Missa in c" K. 427 the coach offers the voice part strongly emphasized. The coach is based on individual recorded parts sung by the Kammerchor Stuttgart, making practicing even more enjoyable!

The Carus Choir Coach offers choir singers the unique opportunity to study and learn their own, individual choral parts within the context of the sound of the entire choir and orchestra. For every vocal range a separate CD containing each choir part is available. The CD is based on recorded interpretations by renowned artists who have performed the work from carefully prepared Carus Urtext editions. Each choir part is presented in three different versions: 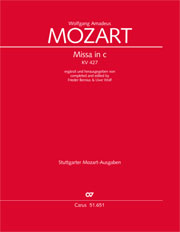 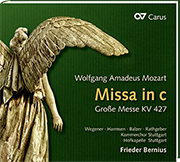 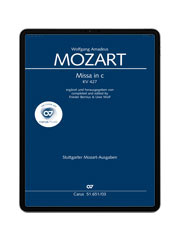