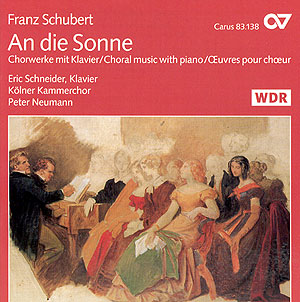 The majority of Schubert’s music for several voices with piano accompaniment lies within the boundaries between secular and sacred music. Like his Lieder, these works are highly expressive.

Schubert was not really a choral guy, but his natural affinity for the voice, his matchless genius for songwriting, and his associations with singers not surprisingly led to his composition of a number of works for choir. Most have the raw cast of functionality, of formula (pleasant as it may be), or even of belonging to a simpler genre--a song or hymn. And as you listen to these pieces for chorus and piano--some quite ambitious in length and structure--you may not be so impressed with their invention or complexity as you are with their sincerity of conception and expression. This sincerity also applies to the excellent Köln Kammerchor's performances, which unfailingly treat these works for mixed choir and soloists, SATB quartet, and women's chorus with affection and consummate professionalism. Although Brahms had far more to offer in this medium, Schubert brings an exuberance and skilled compositional technique to these settings, whether a Psalm--the beloved No. 23 for four-part women's choir--or a cantata--the heavily-wrought, wrenchingly dramatic Mirjams Siegesgesang.
This production, from 1996, is fortunate to have the services of soprano Dorothea Röschmann, who over the past 10 years has become one of the world's foremost opera and lieder singers, and her solo contributions here, while not extensive, are notable. As usual, the Köln Kammerchor shows a consistently well-formed interpretive foundation and impeccable ensemble singing. The sound is a bit too dense and "busy"--textures congeal rather than spin in distinct threads, so we tend to hear a clump of sound rather than a layered blend. But overall we're given a faithful, idiomatic presentation of nine of Schubert's lesser-known but meaningful works, one of which, the cantata Mirjams Siegesgesang, he intended to orchestrate before death overtook him at age 31. As usual for Carus, texts are given in German only.