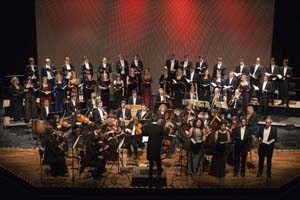 Alongside its dedication to a core repertoire of composers such as Monteverdi, Schütz, Bach, Mozart, Haydn, Schumann, and Brahms, the Vocalensemble Rastatt & Les Favorites frequently explore new terrain with premiere performances. On the heels of its successes in national and international choir competitions, the ensemble has taken part in numerous internationally acclaimed CD recordings as well as radio, and television productions for SWR, Radio France, Deutschlandradio Kultur, and Deutschlandfunk. The Vocalensemble Rastatt & Les Favorites have performed in the Festspielhaus Baden-Baden, the Musikfest Bremen, the Kölner Philharmonie, the SWR RheinVokal Festival, the Europäisches Musikfest Stuttgart, the Schwetzinger Festspiele, the Deutschlandradio Kultur Wartburgkonzerte, the Internationale Musiktage im Dom zu Speyer, the Philharmonie in Mulhouse, and the Centre de Musique “Les Dominicains” in Guebwiller, France, among other venues. The flexible choir does not shy away from excursions into the world of opera, having performed Donizetti’s Lucia di Lammermoor and Bellini’s Norma with Edita Gruberova, and Mozart’s Don Giovanni and Così fan tutte with Rolando Villazón. Together with Klaus Maria Brandauer and the Chamber Orchestra of Europe, the choir also performed Mendelssohn’s Sommernachtstraum at the Musikfest Bremen. The ensemble is sponsored by the German state of Baden-Württemberg in co-operation with its “Kunst 2020” program, as well as by its home city of Rastatt.