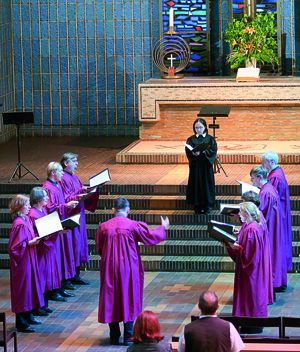 The vocal ensemble sirventes berlin is totally dedicated to early music for small forces and new a cappella music. The group is committed to neglected works from Germany’s rich musical heritage. At the same time the musicians offer a platform for new compositions and engage in interdisciplinary projects. The ensemble comprises soloists from the Berlin Radio Choir, the RIAS Kammerchor and freelance singers. For almost five years sirventes berlin, in a double quartet formation, has presented “NoonSong” concerts every Saturday at 12:00 noon in the Church at Hohenzollernplatz in Berlin- Wilmersdorf – a musical hour of prayer based on the model of Anglican evensong. These performances have resulted in a repertoire of over 200 a cappella motets, including ten premieres. Since then NoonSong has gone on to become more than just an insiders’ tip; every week 150 to 200 visitors listen to the polyphonic liturgy. As supporters of a living tradition, Berlin being the only place where it can be heard in this form in Germany, sirventes berlin made a very successful guest appearance at the Abu Gosh Vocal Festival in Israel in the summer of 2013.