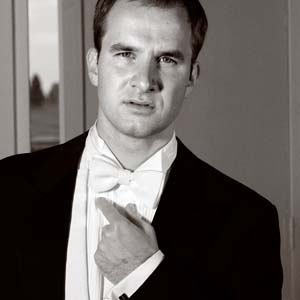 Tobias Berndt began his musical education in the Dresden Kreuzchor. He studied with Christian Polster in Leipzig and continued his training with Rudolf Piernay in Mannheim. He also studied with Dietrich Fischer-Dieskau and Thomas Quasthoff. He was a laureate in numerous renowned singing competitions, winning – among others – the International Das Lied Competition in Berlin, the International Brahms Competition and the Cantilena Singing Competition. Tobias Berndt has also established himself abroad as an opera and concert singer. He has collaborated with conductors such as Philippe Herreweghe, Helmuth Rilling, Frieder Bernius, Teodor Currentzis, Marcus Creed, Hans-Christoph Rademann, Andrea Marcon, Marek Janowski and Sir Roger Norrington and has performed at the Berliner Philharmonie, the Tonhalle in Zurich, the Concertgebouw Amsterdam, the Leipzig Gewandhaus, the Tchaikovsky Concert Hall in Moscow, the Teatro Colon in Buenos Aires and at Lincoln Center in New York. He has also performed at important festivals such as the Prague Spring, the Rheingau Musik Festival, the Händel Festivals in Göttingen und Halle, the Bachfest Leipzig, the Oregon Bach Festival and the International Music Festival in Peking. An extensive discography attests to his versatile artistic activities.