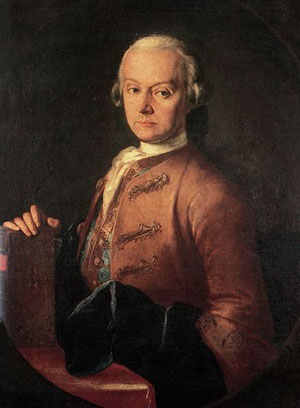 Johann Georg Leopold Mozart was born in 1719 to a respectable Augsburg family. He received his basic musical and humanistic education at the St. Salvator Jesuit College in Augsburg. In 1737 he went to Salzburg to study philosophy and law at the Benedictine University. He was hired into the service of Johann Baptist, Count of Thurn-Valsassina and Taxis, as valet and musician in 1740 at the latest. In the fall of 1743 he obtained a position as the fourth violinist in the Court Orchestra of the Princely Archbishop of Salzburg. He took over violin instruction at the Kapellhaus in 1756 and, in 1758, moved up to the position of second violinist. In 1763, following the death of the Court Music Director, Johann Eberlin, and the appointment of Giuseppe Lolli as his successor, he advanced to Assistant Court Music Director. However, his lifelong desire to become Music Director of the Court Orchestra was never fulfilled. After Wolfgang moved to Vienna in 1781, Leopold Mozart led a reclusive life in the so-called “dancing master’s” house (“Mozart’s House” on Makartplatz today), dedicated himself to teaching and, in his final years, to raising his grandson. Leopold Mozart died in Salzburg on 28 May 1787.